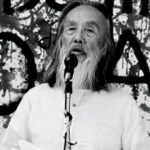 Kazuaki Tanahashi is an artist, Buddhist scholar, and peace worker—the founding director of A World Without Armies as well as a Fellow of the World Academy of Art and Science. Born in Japan in 1933, he moved to the...