How Becoming a Vegan Yoga Practitioner Can Change Your Life

How Becoming a Vegan Yoga Practitioner Can Change Your Life

Yoga and veganism can combine to create deep life changes.

My yoga practice has given me an immense source of clarity, empathy, and self-awareness, opening me up to new levels of compassion. It didn’t happen straight away—it took years, but the change has happened and I continue to evolve.

It’s no accident that I was a yoga practitioner for six years before being open to another transformative, life-changing event that filled me with compassion: becoming vegan.

Once I combined these two great transformations and became a vegan yoga practitioner, there was no looking back.

Why I Became a Vegan Yoga Practitioner

A close friend of mine shared with me how distressed she was after watching a documentary called Earthlings. She made a point of saying that I shouldn’t watch it because it was so gruesome. I thought to myself, “I don’t want to be sheltered from the truth,” and watched it that same day.

The entire time I was watching it I was shaking and crying, with feelings of anger and despair washing over me. I was witnessing the horror of industrial agriculture and animal abuse, and the worst feeling was that I could not do anything but watch. This film changed me forever. I couldn’t unsee what I had seen and go back to the way I was living my life.

That night, I made the conscious decision that I couldn’t live another day contributing to this suffering. Making the decision to become vegan helped me develop compassion as I stepped into the role of a vegan yoga practitioner.

The Benefits of Going Vegan for Yoga Practitioners

Before my transition to veganism, I associated food with tradition and family in a negative way, as my mother overfed me as a child. During my switch to veganism, I realized that in eating processed animal products, I was similarly stuffing my body with foods that increased my risk for cancer, heart attacks, and type-2 diabetes.

In eliminating animal products and most of the oil from my diet, I have drastically improved the odds of living a longer life with a higher quality of life. Having most of the adults in my family die of one form of cancer or another as early as their 40s, I deeply understand that, when it comes to our lifestyle choices, information is power, and what we do with it matters.

When you are able to take better care of your body, your yoga practice can flow more easily. When you have more vitality from an increased intake of nutrients, you have the ability to dive deeper into explorations of poses. And the benefits of eliminating animal products from your diet may lighten the load on your conscience, making it easier to explore deepening your spiritual practice.

The Power of Combining Yoga and Veganism

The Yoga Sutras of Patanjali, one of the foundational texts of the yoga practice, address what are known as the 8 Limbs of Yoga. Each limb is an aspect of the path of yoga, which includes ethics, physical movement, breathwork, and meditation. The first and arguably most important aspect of a yoga practice is ahimsa, the principle of nonviolence. As yoga practitioners, when our hearts are opened to the virtue of ahimsa, becoming vegan is often a natural result.

Prior to being vegan, I was deficient in many vitamins and minerals; I suffered from constant colds, sinus and respiratory infections, and bronchitis; and had major spikes in energy. Emotionally, I felt stuck, harboring resentment and anger and holding on to past pain and trauma, often without even realizing it. Through studying and practicing yoga, I learned that consuming the suffering of another sentient being only contributed to my own suffering.

Modern science is increasingly proving that trauma and stress are often stored in the body. Even generational trauma can be passed on through our DNA. As yogic teachings show us, the body and mind are separate but influence each other. So, working with the body to help access the mind can be extremely beneficial to our healing.

By practicing yoga, we open areas where we hold tension and allow prana (life) to move into these areas again. It may not always feel good, especially in the beginning when different emotions come up. But in time, because the body and mind are manifestations of the same thing, you can learn to turn the senses inward and quietly observe the mind. This helps to quiet the mind.

Through my own practice, more often than not, I’m now able to watch my thoughts, I have an increased volume of interoceptive awareness of discomfort or pain, and I make conscious judgments why I’m experiencing discomfort or pain. Instead of running away from these emotions, I can now use them to leverage or overcome discomfort or pain. And by maintaining a vegan lifestyle, I’m providing myself the ability to live a less-cruel lifestyle, which helps me feel lighter and freer.

Remember that you don’t need to be perfect or extreme about becoming a vegan yoga practitioner. Simply remind yourself of your goal to live a more awakened, conscious life, filled with more compassionate choices for yourself and for other sentient beings. And if you don’t live up to your expectations, you start over the very next day. By making small, intentional choices every day, you build a foundation of discipline for yourself.

Surround yourself with people who have successfully made the transition to veganism. Look to vegan yoga practitioners in your community, your local yoga studio, and the public eye for inspiration. One of my favorite health, fitness, and environmental warriors is Darin Olien, author of SuperLife.

Another great resource is Michelle Cehn. She offers recipes and simple yet insightful everyday advice for going vegan through her social media, podcast, cookbook, and newsletters. She even offers a helpful How to Go Vegan Guide on her website.

Kris Carr went vegan after being diagnosed with cancer many years ago. She is a bestselling author of Crazy Sexy Diet and Crazy Sexy Kitchen. She offers a wealth of resources.

My other go-to resource is the Center for Nutrition Studies, a nonprofit started by Dr. T. Colin Campbell and Dr. Melanie Joy, who is the president of Beyond Carnism and the author of Why We Love Dogs, Eat Pigs, and Wear Cows.

Want more vegan inspiration? Enjoy this interview with Dr. Neal Barnard on the power of a plant-based diet. 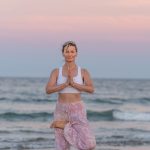 Wanda was born in Poland in 1971 and is currently based out of the Princeton, New Jersey area. She’s been married to Piotr (Peter) for over 28 years and has a 27 year old...

18 Affirmations for Pursuing Your Dreams

“I found an email address for Philip through his publisher and wrote a long query asking him how ...

"A woman in her 40s was seated on a bench at the park entrance. She was weeping. I asked her if ...

Looking for tools to spark your next day of relaxation?

Our bodies have been under siege, and not just due to COVID. Dr. Emeran Mayer explains that it’s ...

Riding the Edge at Maya Yoga