Spiritual doubt helps people embrace the best of religion while avoiding the worst.

“I have doubts. I have such doubts.”
—Final words of Sister Aloysius in the 2008 Academy Award–winning film Doubt

Even though I am an ordained minister, I have struggled with spiritual doubt most of my life. In fact, I consider myself an expert on the subject. If degrees could be earned for doubt, I would have a bachelor’s, a master’s, and a doctorate. With postdoctoral studies.

As a doubting clergyperson, I could teach you many lessons about religious skepticism. For example, among religious believers, spiritual doubt is predictable, inevitable, and often painful. But the most important thing I can tell you is that spiritual doubt can serve as a life-giving, growth-enhancing, spiritually enriching gift. I like to call this the benefit of the doubt.

After my baptism at a conservative evangelical church at the age of 15, I did exactly what my church told me to do: I read my Bible every day. And what I read deeply troubled me. I discovered that in Holy Scripture, God condones slavery, commands genocide, oppresses women, tortures unbelievers, causes catastrophes, and condemns homosexuals. Even though I was just a teenager, I knew something wasn’t right.

Having doubts about the Bible (or any sacred writing) helps people realize that scripture is not a magical book dropped from heaven, no matter the religious tradition. Instead, holy writings are human documents with all the scientific, cultural, and theological limitations of their ancient timeframe. This insight, born of religious doubt, can help people appreciate the beauty of sacred writings while avoiding the destructive results of scriptural literalism, whether it’s the Bible, the Koran, the Vedas, or the Tripitaka.

The same principle is true when it comes to religious doctrines. Healthy doubt can save people from many toxic beliefs. For example, those in the Christian tradition need to doubt the horrific idea that God eternally torments people in the flames of hell for holding erroneous beliefs. Or that non-Christians have no connection with their Creator.

Doubt can also release people from outdated and incredulous beliefs like the virgin birth of Jesus or his bodily ascension into the sky. Doubt helps people realize that these kinds of antiquated, prescientific, fourth-century creedal beliefs are not required in the modern era. The same dynamic is true for implausible doctrines in other religious traditions.

Another benefit of the doubt concerns institutional religion. For many people, faith is explicitly connected to a religious institution like a synagogue, church, or mosque. But this presents significant problems. Why? Because every major religion in the world has a deeply blemished history. And that sordid record continues into the present.

For example, in recent years in America, the evangelical church has participated in malignant culture wars and destructive partisan politics. The Roman Catholic church has experienced a massive pedophile priest scandal. And the mainline church has splintered over human sexuality in a spirit of hostile rancor. Unfortunately, similar dysfunctions exist in other religious traditions, including Islam, Hinduism, and Buddhism. Given these sad realities, doubts about institutional religion are both justified and necessary.

I’m not saying religion is inherently unhealthy. Many religious entities build meaningful community, encourage compassion, and seek justice. But even the best religious traditions, like all human endeavors, are a mixed bag of positives and negatives. Therefore, maintaining healthy skepticism about institutional religion, along with its doctrinal beliefs and sacred writings, helps people embrace the best of religion while avoiding the worst.

Finding a Resolution for Doubt

For many decades I agonized over questions like, Is God personal? Does God intervene in human affairs? Do miracles occur? Does prayer make any difference? and Was Jesus really divine? I also grappled with the dark side of institutional religion, which wounded me on many occasions (but also blessed me).

These struggles came to a head in my early 60s. Unable to reach a satisfactory resolution, I decided to take early retirement. Although that resolved my vocational dilemma, it did not solve my religious angst. In an effort to make progress on that front, I created a website called DoubtersParish.com and wrote a novel titled An Inconvenient Loss of Faith.

During that transition I made a breakthrough. I came to realize that authentic spirituality is not primarily about a book, a creed, or an institution. Instead, it’s about a way of life.

This insight hit me as I reread the New Testament. Freed from vocational restraints, I was finally able to see that Jesus cared little about traditional religious trappings. For example, his Great Commandment (to love God and neighbor), his Golden Rule (to treat others the way we want them to treat us), and his core teachings had virtually nothing to do with conventional religious concerns. Religiosity didn’t interest Jesus. Loving behavior did.

These days I no longer fret about organized religion or its beliefs. Although conventional religion can be helpful and has its place, it’s not the main thing. Instead, living a life of love (kindness, compassion, forgiveness, empathy, inclusion, service, and justice) is what matters most.

In short, loving behavior—not books, beliefs, or institutions—is the core essence of healthy spirituality. As Mark Karris wisely concluded in his book Religious Refugees, “After religion is no more and all of the hay and stubble of humanity’s religious creations are burned up, all that will remain is love.” Jesus and other spiritual giants would concur.

After many decades of grappling with faith and spiritual doubt, I feel like I have finally journeyed through the complexity of spirituality and found simplicity on the other side. I now realize that I will never understand all the mysteries of God/Spirit/Universe, nor do I need to. Instead, I only need to live a life of love. It’s as simple as that. And it is enough. 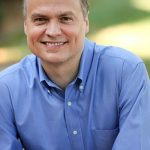 Martin Thielen, a retired United Methodist minister and writer, is the creator and author of www.DoubtersParish.com.

Trailblazer Joseph L. Graves, Jr. believes that we can solve stubborn problems by applying the ...

Naomi Shihab Nye is a celebrated poet, anthologist, and novelist. S&H speaks with her about ...

Engage your whole body in prayer. “Body prayer tries to eliminate the dualistic frame of mind ...

In his new book, Faith After Doubt, the author, speaker, activist and public theologian Brian ...