Recently I watched a documentary on abstract artist Hilma af Klint. I decided to watch this film after encountering her work online, and I had to know the story behind her art. Something about her work took me someplace else, even just from observing it on my tiny computer screen. I felt seen in these paintings, which was interesting considering these were abstract paintings.

As it turns out, I wasn’t alone in feeling this way. The documentary revealed that when her work was shown, years after her death, people fell to their knees and cried at the sight of these colorful otherworldly spirals, shapes, and symmetric lines that are painted on canvases that are nearly as tall as the room.

Over the course of my life, art has regularly made me feel seen. Yes, I’ve had many face-to-face encounters where I have felt seen by people, but it usually takes me weeks, months, or sometimes even years to process the full weight of connections that I’ve had with others. Something about art reminds me that I don’t need permission to be myself. When I am standing before a painting in a museum, I don’t need permission to feel. To take up space. To breathe.

To be seen is to be on the receiving end of empathy. The word empathy found its way into our modern lexicon relatively recently. In her book You Must Change Your Life, Rachel Corbett tells this story: In 1860s Germany, doctor Wilhelm Wundt began foundational work in the field of psychology by studying reaction times “to bridge the gap between voluntary and involuntary attention, between the brain and the mind.”

In the next generation, philosopher Theodor Lipps drew a link between Wundt’s work and his own work in aesthetics. This led him to study why art affects us in such profound ways. Lipps ended up finding additional inspiration in one of his student’s dissertations, as he spoke of this concept of Einfühlung, which literally meant “feeling into.” It was a way of describing how people brought their emotions and memories to what they were gazing at. The first known use in English of empathy was in 1909, pulling from the Greek word empatheia (in pathos).

Empathy explained why people sometimes describe the experience of losing themselves in a powerful work of art. Maybe their ears deafen to the sounds around them, the hair rises on the backs of their necks, or they lose track of the passage of time ... when a work of art is effective, it draws the observer out into the world, while the observer draws the work back into his or her body. Empathy was what made red paint run like blood in the veins, or a blue sky fill the lungs with air. From art and into everyday interactions, empathy has become a word we use to describe our desire and need to “feel into” other people’s life experiences. Yet entering that deep space is anything but a simple process. It takes time. Energy. It’s complicated. To express empathy means entering a story that might challenge your narrative. To express empathy is to do away with questions like the following:

Empathy operates from a different set of questions:

We have spent centuries sweeping emotions under the rug. Sometimes that has looked like telling boys that men don’t cry or not naming our emotions and seeing them as valid. Through advertisements and political campaigns, we have promoted individual happiness as a destination, as if it’s a place we can visit on a cruise. As a result, when we look around, if someone is struggling and not happy, it may feel like it’s their fault and it’s solely up to the individual to fix every issue in their life. While personal responsibility is incredibly important, we need support and understanding from one another. We need to hold the door for one another, even if we don’t technically have to.

The reason I am so passionate about this is because I keep thinking about the years leading up to my autism diagnosis. When I first asked my former doctor for help, I received no empathy. All I received was the message that whatever I was struggling with wasn’t that big of a deal and I needed to take it upon myself to figure it out. What gave me the courage to continue seeking help were the women online who shared their experiences with being diagnosed. Suddenly, I realized two things at once: Yes, I was struggling to figure out what was going on neurologically, but I didn’t have to struggle alone. I didn’t have to feel like a failure because I wasn’t able to get through this on my own. I needed support. I needed someone who was willing to listen. I needed empathy and I found it, and it made all the difference.

Having been on the receiving end of empathy, I now consider it my duty to pass it on. I am where I am today because of the people who were willing to listen to my story and stories like mine without judgment. The more I reflect on my own experience, the more I want this freedom and understanding for others. I want to live in a world where more people feel free to open up, to finally stop holding everything in and exhale what they’re going through, knowing people will be willing to listen and support them.

We have to open up. We have to exhale. And to do this, we need empathy. We need spaces where people are reminded daily that they are free to feel into the hurt, anger, and grief they’ve been forced to keep under wraps. So how do we do this? Art is one of the most powerful forces we have to foster a sense of empathy. Through art, in its many forms, we can begin to probe at the words that are hard to say out loud. And the more we talk and listen to one another, the more opportunities we’ll have to lean into those shared emotions.

Taken from Peace Is a Practice: An Invitation to Breathe Deep and Find a New Rhythm for Life by Morgan Harper Nichols. Copyright February 2022 by Zondervan. Used by permission of Zondervan, zondervan.com. 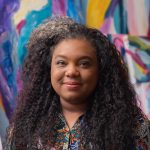 Seeing our own stress, and realizing it’s in our partner too, is the beginning of meeting each ...

Common ways that create a sense of being stuck and their antidote.

From the archive: Selected stories from the past 20 yearsSo here’s the question: It’s a holiday ...

The Unexpected Gifts of Pain

“Creativity is an essential part of being human.” Artist Flora Bowley offers everyday ways to ...