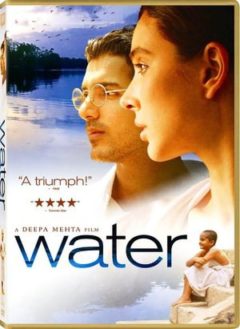 Death threats, the destruction of sets, and the burning of Indian-born Canadian director Deepa Mehta in effigy were some of the tactics Hindu fundamentalists used to try to keep her exquisite film, Water, from being made. Such devices only heightened her resolve; “I will definitely make this film,” she swore, declaring that she felt “a quiet sense of justice that the film got to be screened and people can see it.” The third in a trilogy (Fire and Earth are the first two), Mehta’s film, set in India in 1938 as Gandhi was threatening to topple British colonial rule, reveals the plight of the 34 million Indian widows forced to live what Mehta describes as “a marginal existence at best.”

Chuyia, a feisty and inquisitive eight-year-old widow is sent by her parents to live in a poverty-stricken ashram (institution) for the rest of her life after the death of the much older man to whom she had been wed in an arranged marriage. Because of her, a wealthy Brahmin’s son and a beautiful young widow from the ashram meet, and the circumstances surrounding their hopeful and ill-fated love, symbolized in the film by the delicate radiance of candlelight, are contrasted with the despair and poverty of the ashram-dweller’s surroundings, filmed in grayed greens and blues.

Water, essential for survival and important in rituals of purification, is filmed in its many manifestations, some nurturing and beautiful and others capable of causing death; religious tradition also has many manifestations, and when misused to foster the oppression of the vulnerable, it too may bring death. Mehta might have given us a bleak portrayal of the injustice suffered by women in a patriarchal culture; instead, the film is tempered with hope, laughter, and love, which are, like water itself, necessary for life.