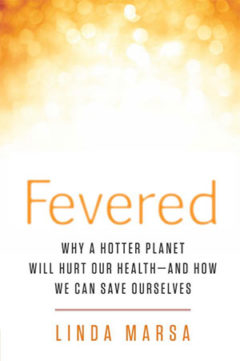 A plague of locusts is about the only thing missing from Fevered, by Linda Marsa. To be fair, the author has little choice—climate change is heavy news no matter how we look at it.

Marsa takes readers on a compelling and breakneck tour of the public health consequences of climate change, making sometimes startling connections to reveal the obvious: climate change is here. It’s been said before, but by throwing her net beyond the environment to include public health, Marsa makes sure climate change is no longer simply viewed like an object seen in a side-view mirror—closer than it appears. The problem is now so close it has already sideswiped some of us, particularly children, the poor, and Australians (who get their own chapter).

An investigative journalist with a long list of impressive credits, Marsa shines as a science writer. She takes time to explain complex concepts accurately and simply, and she doesn’t shy away from hard numbers. In fact, Marsa is so unafraid of numbers she sometimes crams too many in one sentence. It can be overwhelming.

Slightly underwhelming is Marsa’s final chapter, “The Emerald City.” It reads as though  a completely different writer wrestled away her keyboard. The author hails the cities of New York and Vancouver as successful green pioneers. In reality, the cities might look good on paper, but they’ve got a long way to go.

Still, Marsa delivers the news about climate change in Fevered the same way a good doctor might explain to patients they’re headed for life support unless they change their ways. Now.