Repaganizing suggests that paganism is our natural state—that recent trends are simply a return to an intrinsic type of spirituality.

I grew up in a family that attended church whenever the doors were open. At least three evenings a week, I sat next to my parents on a wooden church pew that smelled like lemon Pledge and dutifully followed the routine: pray, sing, listen, sing, pray. Even as a restless teen, I listened as thoughtfully as I could, mimicking the way my parents took notes in the margins of their Bibles. During prayer, I pictured words leaving my mind and floating toward the heavens.

For nearly 21 years, I acted out this pattern whenever I was at home with my family. I tried to feel the holy comfort everyone else seemed to feel, but if I’m being honest, it was an act. I felt no more reverent toward the Bible or church than I did any other book or building. I wanted a spiritual life and practice, but—for me—the fulfillment my parents derived from Christianity was always just out of reach.

When I was 18, my college roommate—now my dearest friend and business partner—introduced me to witchcraft. One of a variety of traditions associated with paganism, witchcraft joins druidry, Wicca, and other practices that today comprise what we might call neopaganism. (Also worth noting, not all witches identify as pagans.)

My roommate lent me books about pagan deities, most of whom seemed more relatable and accessible than the Christian God. I was fascinated by the way she combined symbols, words, and movements to build and direct energy during spells. Unlike me, she wasn’t simply an observer to her own spirituality—she was an active participant in crafting her own experience.

I knew I wanted the same for myself. For several years I lived a dual spiritual existence, remaining in the broom closet at home while actively studying paganism in my college dorm. Nearly two decades later, I’ve shed my Christian skin completely and consider myself a fully realized witch.

Millennials on a Pagan Path

Stories like mine are becoming increasingly common in modern society. According to a study done by Pew Research Center, religious affiliation with Christianity in the United States has dropped from 90 percent in the 1970s to 70 percent in the late 2010s.

These trends definitely seem to be generational, with far more millennials and members of Gen Z turning to pagan paths for their spiritual needs. And with millennials outstripping Baby Boomers as the largest generation, it’s safe to say this trend is likely to continue.

A big question in all of this is why—why are so many young people (myself included) abandoning Christianity in favor of more mystical spiritual practices?

In a recent New York Times op-ed examining French political theorist Chantal Delsol’s latest book (The End of Christian Civilization), Christopher Caldwell states: “Today the Christian overlay on Western cultural life is being removed, revealing a lot of pagan urges that it covered up. To state Ms. Delsol's argument crudely, what is happening today is an undoing, but it is also a redoing. We are inverting the normative inversion. We are repaganizing.”

The term repaganizing is intriguing. It suggests that paganism is our natural state and recent trends are simply a return to an intrinsic type of spirituality—an idea that may be backed up by history.

The Depaganizing of the Roman Empire

In 415 CE, Christianity was established as the official religion of the Roman Empire, a move rooted in layers of strategy. Spiritual practice was ubiquitous in the ancient world. In declaring a Christian theocracy, imperial Roman leaders united their diverse citizenry under a common cultural framework while simultaneously eroding pagan leadership structures. It was a practical way to establish unshakeable authority over a population that spanned continents.

This event set a precedent for conversion. For the next 14 centuries, Christian conversion became standard practice upon encountering indigenous populations across Europe, Asia, Africa, and the American continents. Predictably, this resulted in thousands of rich cultures being systematically dismantled and suppressed.

It’s no surprise, then, that many modern pagans view their spiritual path as a kind of homecoming, a way to reach through time and reconnect with the rich cultures of their ancestors. Since the homogeny of Christian worship suppressed or eradicated many indigenous practices across the globe, this reconnection with the past offers those descended from these groups a sense of identity and belonging they’ve long been denied.

Organized monotheistic religions (Christianity being the most widespread) usually offer a very rigid spiritual framework to which followers must try to adhere. Followers are often expected to mold themselves to the religion, without the freedom to explore and meet their personal spiritual needs. Paganism, on the other hand, offers a more fluid brand of spirituality that we can customize to our needs and integrate more easily into our lives.

Like Vicky, many raised in dogmatic faith traditions fear breaking the rules and becoming ostracized from their congregation. Traditionally, these rules involve controlling personal behavior, such as how members view or express their gender, who they’re attracted to, and even the kind of media they’re allowed to consume.

While many modern Christian churches are working to dismantle these restrictive and damaging rules, the institution’s reputation for intolerance has members of the LGBTQ+ community leaving in droves—which likely also contributes to the high percentage of queer folks in the pagan community. Because although paganism has its own issues with gatekeeping and infighting, the pagan community is generally a very welcoming place, regardless of one’s gender, sexual or romantic orientation, race, or personal presentation.

Rather than being a distinct set of rules or standards, witchcraft offers a wide variety of ways to practice spirituality. You can develop a practice based solely on the worship and veneration of deities from open practices, or skip the deities and be an atheist witch. You can simply commune with nature and care for the earth, or conduct complex rituals to manifest your best life.

[Try: “Reading the Tree Leaves: The Arcane Art of Dendromancy.”]

Additionally, witchcraft and paganism have no formalized leadership. Rather, each practitioner constructs their own practice and has sovereignty over their spiritual path.

As Vicky Black indicated, the way organized faiths are structured limits the ability to explore beyond the boundaries set by that religion. This can curtail efforts to customize spiritual practices to individuals’ needs, especially if they belong to a congregation with strict beliefs around sexuality, gender roles, mental health, or struggles with addiction.

Repaganizing, however, seems to actively provide the tools needed for this kind of healing. Author and witch Lisa Marie Basile agrees with the rebranding of witchcraft as “self-care for dark times.”

“There’s a sense that you are literally gaining energy and strength from the earth,” she writes. “You have something you can draw from anytime—for free, if you’d like.” 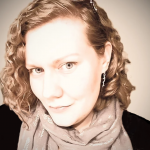 Megan Shoop-Volz is a historian and spinner of stories with a BA in English literature. Her analytical mind and insatiable curiosity have made her a lifelong scholar of the mysterious,...

Celebrating the Spiritual Meanings of Halloween

More than just candy and costumes: Halloween is a holiday that can, with a little thought, ...

Seeing a spiritual sky is about “imaginative ego-transcendence.”

Remedying a Community Through Ritual With Mara Branscombe

Yoga, meditation, mysticism, and ritual are at the heart of Mara Branscombe’s Ritual as Remedy.

Form a Goddess Circle, Find Your Sacred Self

Maiden, Mother, or Crone, there’s a goddess circle for you.

Tap into the Sabbath practices of a hibernating bear. Unplug, rest ... and just be.

Reset your connection to the flow of divine energies. “I began wondering about the numerous ways ...

How To Embody the Triple Goddess Archetype

Understanding the gifts and lessons of each aspect of the Triple Goddess can create wholeness ...