Things Abuela Believed (and You Should Too!)

Something many Latinos have in common is an abuela (grandmother) who might seem a little unusual. In researching my first book, American Brujeria: Modern Mexican American Folk Magic, I heard many stories about abuelas—“abuelisms” as I call them here—from inspired concoctions made of common household products to their terror if anyone walked around the home barefoot. The latter was said to cause sickness, pain, and even weight gain, while the former just might have practical applications you'll want to bring to your life.

How could something as common as Vick’s VapoRub be magical? This topical salve has been around for over 125 years, in which time it's won the hearts of abuelas everywhere. Why? Vick’s signature scent comes from two potent plant allies: eucalyptus and camphor.

Both plants are known for their ability to clear away bad energy and evil spirits while calling in good energies and benevolent spirits. These spiritual effects, along with the salve’s medicinal properties, wide availability, and low price have earned Vick’s its spot as a magical medicinal in homes around the world.

Second only to Vick’s, abuelas’ other go-to is the manzanilla plant, otherwise known as chamomile. During my interviews, many recounted parents and grandparents prescribing chamomile tea for ailments like headaches, menstrual pains, skin conditions, anxiety, and digestive issues.

[Read: “Find the Right Tea to Soothe Body and Soul.”]

While I wouldn’t forego advice from your doctor in favor of of the fragrant herb, studies show that the plant can indeed help with all of these ailments.

Household Cleaners Can Be Magic, Too

Many abuelas swear the common cleaners like borax and ammonia have the power to strip more than just grime: They repel bad energies and spells. Citronella-scented mopping detergent is used to protect the home from bad vibes as well, especially when combined with the tea from plants such as hot chilis, garlic, and rue.

Simply pairing scents (rose for love, lavender for peace, lemon for cleansing) with intention and prayer can make magic happen. A tea brewed with common plants added to the cleaning solution imparts a whiff of magic to everyday rituals.

In my house, I make a cleaning spray with white vinegar infused with the peel and juice of one lemon and fresh rosemary, which I steep for three days. I strain the mixture into a spray bottle, filled about a third of the way, topped off with warm water with a little borax dissolved in it, a squirt of dish soap—and voila, abuela-inspired magic in the making!

One of the most common tools used in Mexican and Mexican American folk magic is are plain old scissors. Used in their open position, they form both an X and a cross: two powerful symbols of protection.

Open scissors can be blessed with a simple prayer and placed somewhere like a windowsill to block spells and entry of enemies and their associated spirits. Scissors may also be placed by the bed, under the bed, or under the pillow to provide further protection: not just from spells and spirits but from nightmares, too. Water placed in a bowl or glass on top of an open pair of scissors for a day is said to take on the ability to remove bad spells, especially when mixed with salt.

The next time you feel yourself about to shrug off abuela’s strange rituals and habits—or any elder’s—consider the power of their wisdom and open your heart to the possibilities of magic. 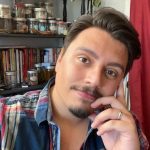 J. Allen Cross is a practicing witch, paranormal investigator, and interfaith minister. He spends his time writing informative books on spirituality and magic and enjoying time with his...

The creator of the nested meditation form shares how to use playful language to release heavy ...

Memories of Manhattan spur S&H Editor at Large Stephen Kiesling to reflect on the "masters ...

Podcast: Brian McLaren, author, and advocate for a new kind of Christianity

What is brewing in U.S. Christianity? Brian McLaren discusses how we can embrace spiritual doubt ...

“Pacifica is re-imagining itself based on values of integration and inclusion that are woven ...

Find some water—in a fountain, a pool, infused in a glass on your nightstand—and balance your ...

Let Grief and Gratitude Coexist: Ingredients for the Holidays

Gratitude and grief are both essential and need to be welcomed and honored, especially during ...

Hats, Shawls, and the Kindness of Strangers