An Excerpt from The Flowering Wand

Explore how men can align themselves with lunar cycles to experience more connection with nature and the divine.

Masculinity is lunar. Gender is lunar. Sexuality is lunar. Landscape is lunar. Bodies, liquid in a flesh silhouette, are tides of lunacy, constantly shifting their internal shorelines. To be lunar means to change—to be full and ripe one night, and tired and reclusive another.

What is the masculine? The masculine doesn’t belong to a specific type of body. The masculine, like the moon, is mutable. There is no final destination for masculinity. It flickers. Thickens. Breaks. Flows. It anastomoses, mycelial hypha by hypha, through soil. Many of the early mythological figures we have “re-rooted” are lunar. They are connected to the night, the earth goddess, the bull, and the underworld.

Like plants, they are always specific flowerings suited to their environments. But once they fruit, mushrooms sporulate, sending their tiny spores on the wind to repopulate the soil of somewhere else. Why not hop a ride on one of these mythic spores and ride it to a mythological being untethered to a specific place or language? A being that we can all access, every night, from any location.

Patriarchal masculinity is painfully static. Think of the collective cultural shock when a male celebrity wears a dress to an awards show.

Men are limited, not only narratively, but visually, given shirts and pants and expected to progress, step by step, into increasingly calcified stories of achievement and strength. This isn’t a gender expression. Expression implies movement and creativity. Patriarchal masculinity stays the same, and it stays still.

As climate change intensifies the likelihood of unpredictable environmental events, flexibility is key. This is best demonstrated by the idea of resilience ecology, developed by ethnobotanist Enrique Salmón. Resilience ecology is a way of describing nonlinear dynamics in ecosystems. Put simply, any type of ecosystem is resilient only insofar as it can adapt to and reshape itself as a result of shocks to its system. We are entering into an age of shocks, as the last several years of a pandemic, wildfires, and hurricanes have shown us.

Biology shows us that nature knows how to stay adaptable. Our very cells are the result of collaborative changefulness. Salamanders and mushrooms can both adapt their sexes in relationship to shifting environmental pressures. Sexual expression, for many beings, is ecologically flexible.

Saccharomyces cerevisiae, a yeast used in winemaking, also has the ability to switch between sexes. The moon is a medicine that can help us practice a similar flexibility. By acknowledging our lunar ability to shift and cycle, we can prepare for an uncertain future by monthly, “moonly,” developing a new mythic musculature.

People with wombs have always known that bodies and consciousness are cyclical, tied to a rhythm that is larger than the individual. The cycle is twenty-eight days, full moon to full moon. Moon sounds like a name or a noun. But let us remember that moon is a gerund. Always moving. Always moon-ing.

The masculine has a womb, too. A moon. All it need do is look up at the night sky.

What is lunar wisdom? Even on a new moon night, the moon is still present: replete and whole, while also void and occluded. This is a completion that holds loss tenderly inside its body. It is neatly summed up by Octavia Butler’s powerful words: “God is change.”

The moon is every gender, every sexuality, mostly both, always trans: waxing and waning. The moon only ever flirts with fullness or emptiness for a brief, tenuous moment before slipping into change. Here is our blended, androgynous Dionysus. Wine-drunk, love-swollen, wind-swept, in ecstatic union with the holy, the moon encourages us to dissolve our edges rather than affirm them.

Lunar knowledge keeps us limber. Keeps us resilient. Awe, whether somatic or spiritual, transforms us. The alternative to patriarchy and sky gods is not equal and opposite. It is not a patriarchy with a woman seated on a throne. The sacred masculine isn’t a horned warrior bowing down to his impassive empress.

The divine, although it includes us, is mostly inhuman. Mutable. Mostly green. Often microscopic. And it is everything in between. Interstitial and relational. The light and the dark. Moonlight on moving water. The lunar bowl where we all mix and love and change. 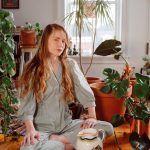 Sophie Strand is a writer based in the Hudson Valley who focuses on the intersection of spirituality, storytelling, and ecology. She believes strongly that all thinking happens...

Slowly Is the Way

Don’t rush to cultivate your gifts in an effort to accomplish or secure what you want or dream ...

From the Editor: A Trust-the-Reader Approach

Our readers know a lot about a lot. And we trust them to explore what they don’t know with ...

An Interview with Louie Schwartzberg

Louie Schwartzberg, the director of Fantastic Fungi, shares details on his newest flick, which ...

Sophie Strand, author of The Flowering Wand, shows how acknowledging our nonhuman neighbors can ...

On the full moon, create a ritual that has meaning for you.

Fall and Winter: The Seasons of Divine Feminine Energy

Learn how to embrace Divine Feminine energy this autumn and winter as the days grow long and cold.