Wambui Njuguna-Räisänen offers her thoughts on social justice, yoga, and the "pluriverse of healing.”

I want to integrate my spiritual journey with my commitment to social justice—but how? Too often the world of spirituality can come off as indifferent to issues of social justice—although the work of Thich Nhat Hahn and Martin Luther King Jr. show the possibilities of the juncture of the two.

During a recent author trip to Finland, I had the opportunity to meet with Wambui Njuguna-Räisänen, a certified yoga teacher and BIPOC-wellness advocate. She’s passionate about making wellness through yoga and meditation seamlessly engaged in equity and justice so that more people of the global majority can live well and thrive.

Wambui is deeply inspired by spiritual teachers and communities that apply insights from their practices and teachings to social, racial, political, environmental, and economic suffering and injustices. She would like to see wellness spaces engage more in social justice, and see activist spaces learn to breathe deeply and practice sustainable self-care in the midst of mitigating systemic harm.

Lesley-Ann Brown: When we talk about social justice, there’s the concept of “otherhood”—to be deemed “the other.” What does this mean to you?

Wambui Njuguna-Räisänen: Otherhood is a lonely neighborhood where, as Zora Neale Hurston put it, ”I can’t understand those who would deprive themselves the pleasure of my company.”

I don’t believe in otherhood anymore since at the root of this assumption is whiteness as the reference point. I’m getting too bored to wager my sense of belonging if it means lukewarm acceptance and insipid tolerance of my Blackness.

My spiritual practice is about training my mind to see through the illusion of separation and other, not in a way that spiritually bypasses the very real divisions we experience based on our social locations in the material reality.

Rather, it’s a way to integrate both the material reality of division and absolute reality of non-separation in ways that incorporate the principles of social justice and caring for life on earth as part of spiritual practice.

You get to reimagine the world. What does it look like?

The world I’m reimagining no longer has habituation to whiteness and capitalism as the reference point; as ground zero. The world I’m reimagining values truth over comfort, where spiritual spaces return to the matter at hand of liberation. I’m reimagining a world where war opportunists and arms dealers go broke, then sit down somewhere and consent to healing from toxic masculinity. Where we institutionalize peace to the same degree and nuance as violence is institutionalized, invisibilized, and normalized into every nook and cranny of society.

I imagine a world where a negative peace is not enough, where conflict is understood as the spirit of a relationship asking to deepen (to paraphrase Malidoma Somé). In the words of American philosopher-theologian Josiah Royce, made popular by Dr. Martin Luther King Jr., the world I’m reimagining contains Beloved Community, where even those who commit atrocious acts of evil are held in accountability as an act of love and not cast out of the net of our interdependent humanity.

The world I’m reimagining is a pluriverse of healing, where we ask of those who have been hurt and traumatized not, “what’s wrong with them,” but “what happened to them?” I reimagine a world where all people, and I do mean all people, can return home to themselves.

The word “radical” means to get to the root of something. If you had to choose one thing that was the root to where we are today, in the world, what would that be?

At the root of where we are today, in the world, as a human species, is that we are experiencing a deep unveiling; systems of oppression are being exposed for what they are; the energy of darkness is demanding to be seen, felt, acknowledged, and potentially healed and transmuted.

We are at a very specific situation and circumstance in this current iteration of white settler colonial civilization. As Kingian nonviolence trainer Kazu Haga puts it, we are currently “death doula-ing a dying empire.” The worldview that dominant culture operates in is not the only rodeo in town and more and more of us are waking up to this. Returning and remembering. However, the question is, what are we returning to? What are we remembering? Are all the ancestors we’re calling in, known or unknown, consciously or unconsciously, here for the upliftment of the planet?

While the scale of human survival is yet to be determined, I can’t rest on hope. But I do have purpose.

Especially when I imagine creating a sanctuary for healing and rest. A lighthouse in the midst of the roiling thunder of war, systemic oppression, climate crises, and an addiction to punitive justice, violence, and power-over.

I can’t help but imagine all those who are so removed from their inherent, basic goodness, so ravaged by intergenerations of hatred and greed, drunk on the power of white supremacy who would rather take everyone else down, along with the sinking ship …

… than endure the labor pains of the shy fetus of a world imagined beyond this one, who prefers the darkness of the womb than being birthed at the moment.

In moments like these, I feel myself reaching to pull my children in closer to me, relishing their tender age, before they go further out into this beautiful, burning world.

And I wonder, who do I need [to be] in order to be free from both the hope and the fear?

If you enjoyed this interview of Wambui Njuguna-Räisänen, dig into this piece on Mother Aya, also from Lesley-Ann Brown. 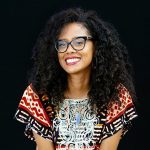 A Blanketing Ritual for the Full Snow Moon

Explore the magical potential of the Snow Moon. Its safety and shelter can assist in letting go.

Something joyful, beautiful, pleasurable, or delicious is happening: Notice moments of sweetness.

“Once while we were traveling in Japan and heard a white man speak fluently, my grandmother told ...

Sadhguru on North American Tour with Release of New Book

Sewing can be a meditative practice. It’s all about connecting the threads.

Finding Wisdom Within: A Profile of Yung Pueblo

Explore what it means to truly cultivate wisdom in an interview with author and poet Yung Pueblo.

9 Stories for Healing the Body

How I learned to tame my subscapularis muscles, buried behind each shoulder blade.