Focus on a dilemma or stressor, then use the ancient text to interpret coin tosses in order to resolve it.

Our rescued goldfish, Picasso, watched in amusement as I threw money on the floor for over a decade. Treading with his head pressed up against the glass, he seemed mesmerized as I oohed and ahhed, hunched over coins and an I Ching to prioritize my day.

While that might seem an absurd sight, fish and spirituality have been linked for millennia. There are the Christian fish stories, of course. Buddhist monks often placed goldfish in ponds to assist their contemplation and cultivate compassion. Sometimes, they participated in mercy releases to earn merit through the (now environmentally controversial) act of fang sheng. Taoism is full of fish symbolism, especially as an ideal for staying alert―since fish never close their eyes. Likewise, Jewish symbolism suggests fish eyes symbolize God’s constant protective gaze.

Recently, Picasso moved on to what I like to call the great “What’s Next.” I miss him dearly, and at the same time I’m grateful he’s finally freed from human captivity. Perhaps he gained merit for educating a human on the value of fish lives and helping release her from various bouts of overwhelm.

Why We Need the I Ching Now

It’s not surprising that we’re more stressed than ever. The American Psychological Association’s Stress in America report found that 78 percent of people surveyed feel significantly stressed by the global pandemic. Nearly half of the adults indicated their minds and bodies have been negatively affected, including increased body tension, getting angry quickly, unexpected mood swings, and yelling at loved ones.

What’s more, the pandemic isn’t the only thing we’re wrestling with. Sixty percent of those surveyed by the APA said the number of issues the US now faces is overwhelming. People surveyed reported disrupted sleep, eating more unhealthy foods than usual, depression, restlessness, loneliness, and other mental health imbalances. Many also observed that it’s hard to think properly or concentrate.

When we can’t concentrate, we have trouble making decisions. Instead, we rush to distractions for the dopamine they give us—a momentary way to feel good. But when we sacrifice our attention, we lose our intentionality.

And this is where I think working with the I Ching can help. It’s like a powerful filter that helps strip away nonessential tasks and calm overactive minds.

Choosing an I Ching

Also known as the Yijing or Book of Changes, this 3,000-year-old book is meant to be interactive. Like all sacred texts—especially those translated into different languages—there is no one authoritative version but multiple versions, each a slightly different flavor. My favorites include:

I’d be remiss not to note that app-based versions of the I Ching are also available. My favorite is Paul O’Brien’s beautifully illustrated Visionary I Ching.

There are multiple ways to divine. Traditionally, 50 yarrow stalks were sorted, however I keep it simple and throw three coins six times. I have a set of old Chinese coins I use, but if I forget to pack them when I travel, three modern coins work as well. You just need to ensure different images are present on the front and back. You’ll also need your I Ching translation and a dedicated notebook. 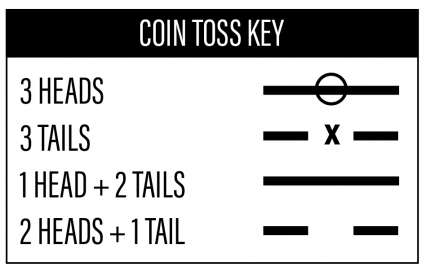 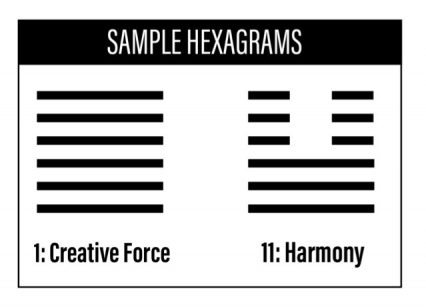 6. Repeat five more times, stacking your six lines from the bottom up.

7. The result is a hexagram symbolizing yin and yang’s interacting energies. The lower three lines and upper three lines each make a gua, and their combination determines your final result. There are 64 possible options, which will appear in a chart in the front of your I Ching by number and often a topical name (Seeking Harmony, Tread Carefully, Turning Back, Proceeding Forward, etc.)

8. Turn to that hexagram’s chapter in your I Ching, and you’ll find a few pages of interpretation. While reading, take time to notice any words or phrases that grab your attention. Write these down in your journal, including any insights that may arise about the topic that was initially troubling you. 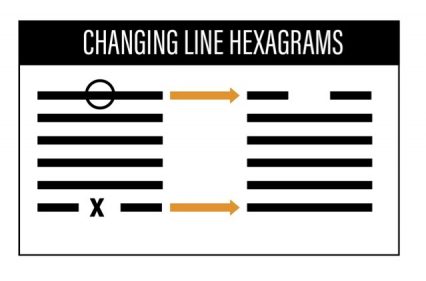 9. Note that if you throw changing lines, it really gets interesting. This is the Book of Changes after all! For example, if you have a single changing line, you should pay special attention to that part of the text. If you have more than one, your I Ching text will describe the process for consulting the second hexagram that you are moving towards or approaching. Noticing the differences between where you are and where you are headed often helps with decision making, highlighting what you might seek or remove from your life.

10. Sit silently for a few more minutes. Reflect on the information that has been revealed from deep within yourself. Now, consider your to-do list or the action that seemed overwhelming when you started your practice. Does it feel lighter now? Are necessary actions clear? Or is it time to be patient and wait for more to be revealed as you move about your day?

While I Ching divination can seem complicated at first glance, after doing the practice for a few days, your I Ching may become the most important book on your shelf. And a welcome morning practice.

A Short Note for Animal Lovers

Taoist texts often refer to animal farming or hunting situations. As modern practitioners, we need to understand the context of―and symbolism beneath―these passages. While reading, it may be helpful to interject what we know about these beings’ sentience and potential for inner lives, as we do in other areas of our lives.

For example, contrary to the cliché that a forgetful person has the “memory of a goldfish,” these fish can retain memories for at least five months, likely longer, and figure out how to solve problems. They do indeed have brains; feel pain; and are socially intelligent, able to distinguish between—and remember—faces. And some (though sadly not dear Picasso) can live up to 40 years!

Do you think you won a jackpot by being born? Rabbi Rami takes on spirituality and luck.

Can You Engage in Ministry and Be an Entrepreneur?

The Castle Hot Springs in Arizona awaits. Water pours from fissures in the rock and wellness is ...

Once believed to bestow supernatural ability, siddhi powers can be adapted to meet your goals ...

“Anxiety isn’t trying to limit me but free me from a situation that no longer feels good.”

5 Ways to Calm Down During COVID-19

It’s a pandemic and you’re a stress ball. Here are 5 ways to catch your breath and calm down.

Four Keys to Unlock the Wisdom of Anxiety

I wouldn’t have expected the ER doctor to say, “Welcome, you’ve just entered your dark night of ...