Learn why mixing alcohol and menopause can be a recipe for unease.

Mood changes, sleep disturbances, changes in metabolism… Menopause can feel like a whole-body (and mind!) shift. Go-to de-stressors don’t seem to work like they used to, particularly that nightly glass or two of wine.

Dr. Stephanie Faubion, medical director of the North American Menopause Society and director of Mayo Clinic Women’s Health, explains that the prevailing wisdom used to be that symptoms might last a year or two. “We now know the mean duration of symptoms is seven to nine years,” Faubion says. “Some women have hot flashes and night sweats for a decade or more.”

While the prospect of years of symptoms may feel discouraging, the good news is there’s one lifestyle change that may help across the board: replacing alcohol with more nourishing relaxants like yoga, meditation, or light exercise.

One of the reasons alcohol and menopause can harmful in combination is that alcohol use can mimic several perimenopause and menopause symptoms, exacerbating stress and discomfort. Cutting back or eliminating it entirely may make the transition significantly more manageable.

Alcohol negatively affects sleep; so does perimenopause. As a result, “Women may notice a compounded effect,” says Faubion. “They're not sleeping well because they're in midlife and approaching the menopause transition, which is already associated with insomnia.”

Insomnia is not the only sleep-related disruption related to mid-life changes. Vasomotor symptoms like hot flashes and night sweats often fuel tossing and turning. Alcohol is also a vasodilator, meaning it causes peripheral blood vessels to relax and brings more blood into the skin and tissues. While there’s mixed evidence on whether alcohol directly influences vasomotor symptoms, many women report that drinking red wine, in particular, turns up their internal thermostat.

If the quality and duration of your sleep are worsening, try out two weeks without evening wine or nightcaps. Track your sleep and note how you feel in the morning to assess what sober sleep feels like for you so you can parse out which issues are alcohol-related and which are hormonal.

Moreover, the body tends to burn alcohol before turning to our own existing fat reserves. This means regularly consuming calories from alcohol makes it more difficult to lose or maintain weight. Cutting alcohol can help determine whether dietary changes are necessary.

“The menopause transition is considered a window of vulnerability for women in terms of mood,” says Faubion. “Mood disturbances can be influenced by alcohol, too, as alcohol is a depressant.”

According to Faubion, people who’ve experienced hormone-related mood changes like premenstrual dysphoric disorder (PMDD) or postpartum depression are more likely to experience depression with menopause. This is also true for anyone who has experienced a major depression in the past. “The prevalence of a mood disorder in midlife is pretty high,” she says. “Anxiety is another symptom associated with the menopause transition.”

Alcohol allays anxiety in the moment, but it won’t fix the underlying cause. Over time, it can make it worse. “It's the same with depression,” Faubion explains. “Alcohol is a depressant, so it really can’t fix a mood disorder.”

If giving up alcohol to improve well-being during menopause feels drastic or impossible, it may be worth asking: Why?

“Women need to identify what [drinking] is for them,” Faubion says. “Is it a habit or a stress management technique? Are they trying to address a mood disorder? What’s behind it?”

If drinking in the evenings is a habit, a simple switch could be a fancy glass filled with fizzy water and lime instead. If alcohol is used as a stress reliever, consider healthier outlets like going for a walk with a friend, preparing a healthy meal or checking out a new yoga class.

The menopausal transition may also be an invitation to examine drinking habits that have crossed the line from take-it-or-leave-it drinking, to grey-area drinking, all the way into dependency territory. Talk to a trusted healthcare professional or therapist who specializes in substance use disorders to get perspective if drinking feels compulsive.

“If you have concerns about [your drinking], I would definitely broach the question: ‘Here's how much I'm drinking. Do you think this is a problem? Could it be contributing to my symptoms? What can I do about it?’” Faubion suggests. “If you see it as a problem, chances are your provider is going to see it as a problem, and you can work together to figure out what the solutions might be.”

Faubion urges anyone experiencing menopausal symptoms to bring those concerns to their doctor as well. Alcohol can mask some symptoms temporarily but may also be making them worse. Taking a break from drinking helps offer clarity on how untreated symptoms are expressed and opens up alternatives without the side effects of drinking. 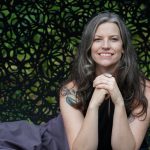 Adrienne van der Valk is a writer, recovery mentor, and yoga and meditation teacher. She’s the co-founder of REVA Recovery Support and co-host of The Hangover Liberation Society podcast. Download a free chapter from her forthcoming book Big Sober Energy at bigsoberenergy.com.

Your Assignment: Build Your Own Morning Altars

Yoga for Allergies or Seasonal Colds

Here are three yoga postures that can really help your body deal with coughs, colds, and ...

There are a variety of ways to approach energy clearing.

Could the Peloton bike ad be sort of okay when viewed through a different lens?

Living a Full Circle, Aging, and Coming to Terms With Death

“Could they imagine that the bikini scar left across my pelvis after my uterus was removed, ...

What Is Alcohol Costing You?

“I’m going to hazard a guess that the average drinker loses about 20 percent of their bandwidth ...

Learn how to use the practice of emotional alchemy to help you become wiser as you age.