Step one: Discover how to write affirmations that work for you. Step two: Combine your affirmations practice with the lunar cycle.

Affirmations in one form or another have been spoken by followers of the world’s oldest spiritual traditions for millennia. Evidence of their effectiveness can be found in both their enduring legacy and in modern neuroscience research.

But unlocking the power of an affirmation is not as simple as reading words aloud. It takes intention and focus; harnessing lunar energy can help amplify both.

An affirmation is an intentionally crafted sentence that captures something very personal to you, something you want to change or have happen in your life. Writing an affirmation crystallizes your desire by putting it into words that are meaningful to the subconscious.

When affirmations don’t work, it’s usually because people overwhelm themselves by thinking, “What is the biggest block in my life?” Instead, begin by focusing on what is going on for you in the present moment.

Why do you feel distressed today? What is the block for you in that moment? What is the most pressing issue right now?

We don’t want to overwhelm the subconscious by identifying the biggest block right away. But when we just ask, “What is present for me today that I would like to get rid of or change in some way?” then we can identify it through a process of self-examination and gain clarity about the nature of the block. It’s useful to do that with another person, but you can also do it through journaling.

For almost everyone, we realize during self-examination that one or more of our core stories are being activated. By examining how these stories show up over months or years, you can dissolve major blocks that manifest in all sorts of different ways.

Once you’ve identified the core block, you can then start to craft the affirmation in the form of a sentence. The sentence should be as concise as possible, written in the present tense, and contain particular words that are meaningful to you.

For example, maybe my block that day is thinking I’m not going to make enough money to buy the house I want to buy.

I examine it again: What is actually causing my anxiety? If I’m honest, it’s a fear of abandoning myself and abandoning my partner. That if I don’t make enough money, this bad thing will happen.

Worrying about the house activated a core story for me, which is fear of abandonment. Through the examination process, I can identify that I’m worried that what happened to me in the past will happen again.

Now, I’m ready to create a sentence that summarizes the opposite of that feeling. An affirmation affirms the energy and the experience that you want to have. It is the antidote for the spiraling, negative, worst-case scenario fear.

A sentence for me in the example situation could look something like, “The more I show up as myself, the safer I become,” because I’m trying to reassure myself that I have the capacity to keep myself and my family safe.

A good, powerful affirmation will always have a bit of an edge. The thing you’re trying to affirm might not feel true. We’re trying to find a middle ground between an affirmation being absolutely rejected by your subconscious and it being slightly uncomfortable for you. Slight discomfort is a sign of a good affirmation.

Slight discomfort is a sign of a good affirmation.

Harnessing the Power of the Moon

Saying your affirmations three times twice a day will have a real and positive impact; connecting them to the lunar cycle, however, will supercharge that impact.

In this practice, we create a set of four affirmations, one affirmation for each segment of the lunar cycle.

The moon is our closest celestial object, the rock closest to the earth. The moon has so much power—not just metaphysically but also physically—because its gravity is literally pushing and pulling us and the water in our bodies. Not just us: plants; animals. The waters of the earth, the tides, are created by this gravity throughout its cycle.

The moon cycles through 28 days, from full to dark and back to full again. We divide that cycle up into four quarters: full, waning, new, and waxing. Of course, the moon is only full or dark for a tiny moment; however, astrologically, we give each period seven days when working with the moon.

[Read “14 Affirmations for Trusting Yourself.”]

That full moon period is when the moon’s energy is most apparent. It’s the fullest expression of radiant, shining lunar power; everything is elevated during a full moon.

When we’re creating a set of affirmations, a full moon affirmation would focus on the strongest, most powerful version of ourselves that we want to be and how we want to feel.

When I’m creating full moon affirmations with my students, I tell them not to focus on the block but on the best possible way they would want to feel. Then, we create an affirmation that crystallizes that.

Previous full-moon affirmations for me have been things like, “I am wonderful, and everybody loves me” or “I live a joyful and peaceful life.”

After full moon, the moon begins waning or reducing in size. During this time, it’s most powerful to say affirmations about what we want to release or let go of. The moon’s impact on us is reducing in energy. It’s getting smaller and quieter. If we are intentional, we can harness that shedding energy.

A good starting phrase for a waning moon affirmation could be something like, “I finally release …” or “I joyfully reject …” We’re looking for phrases that focus on letting go; they can be as common and gentle or as powerful and artful as you like.

After the moon wanes, it becomes completely dark; immediately after that, we have a new moon. During the seven days around the new moon, it’s helpful to focus affirmations on new beginnings and doors opening. A phrase that I like for this is, “Every day I’m planting new seeds of …”

Finally, we have the waxing moon. This is the energy of increase, growth, and progress. For this phase, create an affirmation about drawing in something good.

Some useful phrases for that are, “I attract …” or “The more I …, the more … I experience.” Focus on expansion, growth, and increase.

Syncing affirmations with the moon is sympathetic magic. By linking up our actions to bigger celestial actions or more powerful energies, we do less work and have more impact. We challenge our blocks from four angles instead of one. And, over time, we learn that we are more powerful than our core stories.

Whenever you say your affirmations, it’s important to say them at least three times per session. In all traditions of spiritual practice, three is a sacred and magic number. In terms of sacred geometry, for example, a three-sided equilateral triangle is the most stable shape.

When we say something the first time, it might not sink in. The second time, your subconscious is hearing better and learning. But the third time, it’s solidly going to be in there. The thought, like the triangle, has become stable.

Committing to an affirmation practice can help us transform negative thinking patterns, break bad habits, and improve the way we speak to ourselves. With practice, affirmations can become part of a manifestation practice that opens our lives to infinite possibility. When we tap into the energy of the universe, the universe becomes available to us. When we open ourselves to the power of the moon, not even the night sky’s the limit. 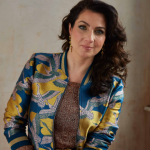 Kate Tomas (she/her) is spiritual teacher, mentor, and advisor, with a doctoral degree in theology from the University of Oxford. She is a practising witch, ceremonial magician, and...

“New moons are related to water and fertility. Metaphorically, in the dark of the new moon, we ...

If you are plagued by nightmares, try one of these three practices to shift your perception of ...

Against God? Whose god? “It is difficult to be against the god of another’s imagining without ...

Can You Engage in Ministry and Be an Entrepreneur?

5 Risks of a Spiritual Path

Discover potential pitfalls for the spiritual seeker based on two decades of research.

The May supermoon marks a turning point, a movement into the bright, sunshiny half of the year.

Refresh Body and Spirit With a Moon Practice

Does your New Year’s Resolution feel like a distant memory? The moon provides a monthly fresh ...

How to Forgive Yourself by Practicing Restorative Justice

“Learning about and trying to practice a form of restorative justice can help you work toward ...

15 Affirmations for Releasing a Relationship That No Longer Feels Aligned

Remember—letting go is not the same as giving up.