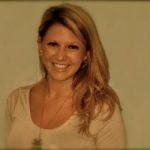 Ariana Hendrix is a native of northern Michigan, currently residing in San Francisco where she is pursuing an M.A. in English Literature at San Francisco State University. She finds enlightenment in the beauty and...