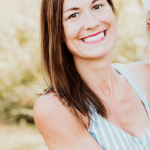 Maria Okorn is a freelance writer and social media manager. A former high school English teacher, she now spends most of her days at home in beautiful Northern Michigan with her husband and...