Kast: I'm just thinking of the climate of our world. And for me, spirituality is always about honoring my dignity and always honoring the dignity of those around me. I'm thinking about this in light of the pandemic and the political, I would say, crisis that honoring of dignity is a radical thing right now. And the fact that all people have dignity, and then my tradition, all people are invited to take in the table, the sacrament of God. That, that's radical. But there's a belonging for everybody. For a lot of my practice, personally, and in my leadership, there's a lot about human dignity, and the honoring of the sacred earth dignity as well. That's pretty radical.

Today when we think about the hate and racism and homophobia. The honoring of someone's wholeness of dignity, is definitely spiritually radical to me. And for me, that is rooted in, again just speaking from my tradition, which is in the United Church of Christ and then the Minister of word and Sacrament … When I look at my scripture, the love of God, the love of neighbor, the love of earth. And every day we have an opportunity to practice that. Am I loving myself today? Am I loving my neighbor today? Am I loving God how I understand God? We are always practicing that and love, truly love is revolutionary.

Have you ever felt like an outsider in your faith? And how has that influenced you?

Absolutely, yes. And so what I did was I got ordained in it. You know, so instead of leaving it … I think anybody who feels like an outsider at any time has two paths in front of them.

Two big choices: to leave it, which is okay. And that needs to be blessed, or to dig into it more. And I chose to dig into it more. And if I could use actually something outside of faith, I love fashion a lot. And the late, great Alexander McQueen, who did a lot of Lady Gaga fashion, after his death at the Met, in New York, they did a very beautiful curation of his work. Alexander McQueen was avante garde and pushed the fashion boundaries. And he said, I have to know the rules in order to break them. What you see in Alexander's work as a fashion designer, it's someone who knows the basics of sewing and how to put fabrics together. But then, someone who knows how to also move the rules forward and create avante garde fashion.

I've resonated with that a lot of my life I have felt like an outside there at different times. What I've chosen to do is digging even deeper to go to, like drilling for oil, going deeper into this, um, so that I can be one of the voices that help lead them in a new way.

I also feel an obligation to create more space for others who feel like outsiders. I feel like that's a lot of my own ministry, too. If people choose to leave whatever their faith or upbringing practices, we need to be able to bless that. And I think that's important. And there's agency there. But no one ever should be forced out of their home faith or home spirituality. That's a form of violence, in my opinion. Part of what I hope to do and just being me and also in the roles I'm called to is just to maybe knock some walls down of that house and say, Oh, no, there's more rooms here. Let me show you what we just redid. You belong here.

What has been your greatest hurdle in relation to your faith?

When I was five, I knew I wanted to be a minister. I did not see a woman being a minister leading me in a church service until I was in seminary, which was graduate school. So that was 23 years of my life. I never saw a woman leading me, but I kept at it. I did not let the dream inside me die, I kept finding voices that I knew were out there. So institutionally, there is still a lot of issue with women in leadership and then put on top of that coming out as queer and marrying a woman. I think that one of the hurdles I had to deal with was my own internalized homophobia and my own inner voices of religious traditions that I was taught. And I had to deconstruct them in order to be the whole person that I am, in order to then go after my vocational dreams that were inside me.

What would your advice be to people who are looking to explore faith in any sort of capacity?

Second, as you learn about things that you want to do in the spirituality that makes you come alive and supports you, find people practicing that. Whether on social media or in your own local community or online. There are other people that think similar to you, search them out and begin to be in conversation with them. And then as you find that you're not alone, you will continue to grow in the path that is particular to you.

But you're not alone. That's important.

A lot of people differentiate between spirituality and religion, and some people will say, I’m not religious, but I am spiritual. How do you see that? What is your own distinction between those two things, if any?

I am religious and I am spiritual. I practice a religion that is ancient. That is bigger than me. That is global. That literally honors the deceased saints and ancestors, you know, to come upon all Saints Sunday. That's the religious container that I find myself in. And the spirituality is how I choose to personally practice that both in my personal life and then the spirituality that I lead in the congregation that I lead. So, religion wise, in December Christians will celebrate Christmas. That's the religion right there. But then the spirituality is the particularities of how I practice that and how my local congregation practices that. Which might be different than somebody else who also claims the same religion.

You say “Michigan raised me and New York formed me.” What have each of those settings done to influence you and how you view faith?

Let me also say, as as I'm now sitting outdoors in Pennsylvania, there's an agroecological perspective of spirituality and religion, like Michigan gave to me that I'm refinding again in Pennsylvania.

Now, New York gave me so much, gave me the space to both come out, gave me the courage in my spirituality. New York reinforced the chutzpah that I've always had in my life. It was almost like a sanctuary for me of this interreligious 8.4 million interreligious people constantly and dialogue in this great cosmopolitan city. New York was, is, and continues to be such a spiritual place for me. Because that coexistence happening there, it was always just so magical to me. New York is also where I began to feel more and more comfortable in my voice as a strong woman foraging some new territory in my religion.

Religious and queer communities had a very turbulent relationship in the past. As a member of the queer community, what have you struggled with that spirituality? Have you reconciled with those issues, or is it a daily struggle?

A huge part of my story is I went to a small, private Christian school. I went to Cornerstone. And part of that, what you do is you get married to not someone of your own sex. And I did, I got married to a fine man. And that's part of the story that then you and then you have, like, 2.3 kids or whatever. I came out in that marriage. I went to seminary in many ways not only to become a pastor, but I had to do my own deep dive into my religion. If this is gonna be my religion and my spirituality that I both teach from as well as practice personally, then how do I reconcile teachings of the past with who I am? Divorcing and coming out and being true and authentic to who I am. Being honest about that, that I'm a queer woman, and I am both wild and holy—as tattooed on me—And they both can exist inside who I am.

Why do you think that spiritual radicalism is necessary?

I think people are hungry for people to actually believe what they're saying.

People will claim their faith or religion and I know I would pause and think, Does it matter? Does it really change how you live? Does it really? Or is this just, pull out the Thanksgiving tapestry and it's just something that you're supposed to do? I think being a spiritual radical, for that title, is people want, I want, authenticity. People are hungry, particularly in this world that's full of a lot of chaos and a lot of heartache and a lot of oppression. Show me that faith and spirituality and religion matters. Does it honestly matter? Does it change your life in a way that brings about more justice? That brings about more goodness that brings about more love?

Those are the people. The other spiritual radicals are the people that I'm most interested in, even if our religions are different. I say this often. Actually, it's my Jewish and Muslim friends that actually inspire me to be a better Christian. I was at a Yom Kippur service on Zoom recently. My friend invited me, and it is not my home, but I was invited into that home. And so that's not my religion, but the spirituality of that moment I could practice with them. And that pushes me again deeper into my faith.

What would you say your most radical idea is religious or otherwise?

I just want queer folks and women and indigenous people and black and brown people ... there's this amount and immense divine love energy in us. And I want all of us, particularly those who have been in vulnerable positions in life, to find healing, to have strong voices that speak with clarity and compassion and to know that whether there's a place at the table for us or not like Shirley Chism, we bring our chair with us and we are there and then the second part is like, I genuinely believe that love is radical, like I genuinely believe that learning how to love our neighbors and love ourselves is radical. I think that's something we have to practice every day. This is more than just cute T-shirts like this is an actual discipline about how we live our life. I think that compassion is one of the ways we do that. 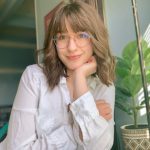