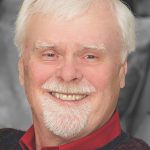 David D. Burns, M.D., is an Adjunct Clinical Professor Emeritus of Psychiatry and Behavioral Sciences at the Stanford University School of Medicine. He is the author of Feeling Good and...