Meet three women who are champions in their communities. 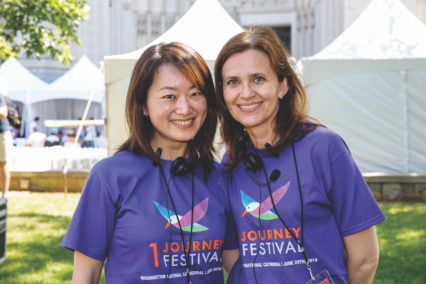 Wendy Chan was born in China into a family that had faced a long line of persecution and upheaval. A great-grandfather died as a political prisoner; a grandfather fled civil war; her parents lived through the Cultural

Revolution. At age 12, she immigrated with her parents to California. Today she has a deep sense of gratitude and a desire to pay it forward. “For the most part, I have won life’s lottery,” she says, in contrast to the 70 million people who are either refugees or internally displaced, people who “were born in the wrong place and wrong time.”

Chan is an executive at global consulting firm Accenture. She is also a mom to two young children. Over the past few years, she witnessed growing attacks against immigrants and refugees. Even though her own life was packed, she knew she had to live up to her values by finding a way to do something. Initially unsure how to help, she leaned on her experience as a consultant and did research, deciding that what was most needed was to change the narrative around refugees by highlighting their contributions.

Started in 2017, One Journey has grown into a robust coalition. The keystone event for the organization has been the One Journey Festival, started in 2018 and attended in 2019 by 5,000 people in Washington, DC, on the sprawling grounds of the National Cathedral.

Although COVID-19 caused this year’s festival to be cancelled, One Journey Alliance has many other programs and is expanding beyond the DC area. Learn how you can help at onejourneyfestival.com.

For Sherry Cole, recognizing human dignity in all persons starts by calling the community she serves “people who carry their homes on their backs.”

“Many don’t want to be called homeless,” she explains. “They’ve chosen the town they live in, or they grew up here. They just don’t have housing, and that’s different. Home means more than just walls.”

After working with the nonprofit Grand Valley Peace and Justice to relocate men seeking shelter during the harsh winter months, Sherry stepped into the role of program coordinator for the organization’s overflow shelter program. Eventually, Cole gave up her salary to alleviate some of the organization’s overhead costs. She now works as a full-time volunteer. “God is my source and supply. I firmly believe that, and it has been proven true for me again and again and again. That money has allowed this organization to begin to prosper in different ways,” she says.

Her focus on honoring the dignity in every human person and in walking with those whom she serves creates a space for people to begin to believe in themselves and their own worth. She believes the world is filled with people doing good for others. “I know that the golden rule runs through all religions, but practicing it really means that if I were that person standing there right now, what would I need? What would help me feel better, feel heard, feel that you were really acknowledging me and being sincere?”

“Ballet is for all people,” says Abby McCuen firmly. She’s the behindthe- scenes director for the Savannah Ballet Theatre (SBT). She spearheaded the creation of SBT’s low-sensory programming for children with sensitivity disorders.

In December 2019, SBT premiered a low-sensory version of The Nutcracker for local students. The entire orchestra performed without their usual microphones; instead of crashing her cymbals, the percussionist muffled her instrument. Lighting was different too: The house lights stayed on and there were only very subtle lighting changes onstage.

Part of the prep for The Nutcracker low-sensory show included a frank conversation with the ballet company, says McCuen. Dancers were free to ask questions about the format. “Our choreographer explained that people with autism sometimes make noises when they are excited, and that it’s not a bad thing, it means they are stimulated. It’s all about bringing awareness.”

“I’m a parent, and as parents sometimes we think kids just know things and how to process emotions,” observes McCuen, “but you have to teach them. You can’t expect people to know what to do at the theater if they haven’t been.” After the performance, McCuen says, “The parents of the children were coming up to me and saying they had never had the opportunity to take their child to the ballet.”

What is a Community Champion? Someone who champions the values of our community. We’re looking for people who understand that happiness comes through service and who make the world a better place with kindness and humility. Got suggestions? Let us know at [email protected]