Renowned Buddhist meditation teacher Sharon Salzberg’s first book on meditation was Lovingkindness: The Revolutionary Art of Happiness, which she penned in 1995. Since then, she has written a book almost every two years, in addition to audio programs and countless articles. This year marks the tenth anniversary of Salzberg’s New York Times bestselling book Real Happiness: The Power of Meditation.

Her prolific writing stems from her personal practice. “I find that the most creative time I have is when I do meditation—sitting or walking. I’m not trying to resolve a dilemma or figure something out. It’s just that in the process of meditating, a greater spaciousness is created in my mind, and that’s when the creative solution or next step for something appears naturally.”

She first dove deep into Buddhism while taking an Asian philosophy course as a college sophomore in Buffalo, New York. A basic tenet of Buddhism, that suffering is part of life, served as a liberating philosophy for Salzberg and pointed her in the direction of her life’s path.

“I had a tumultuous and traumatic child hood and in my family it was never spoken about,” she explains, “I didn’t know what to do with all those feelings inside of me. In effect it was like the Buddha saying to me, ‘You’re not so weird, this is a part of life, so you don’t have to feel so marginalized.’ That in itself was very liberating.”

As a result, “I caught fire with wanting to learn how to meditate!” she exclaims. But in that era, Buddhist-style meditation was so rare in the West that Salzberg couldn’t find anyone to teach her. She laughs that she could have found a book and learned about meditation that way, but instead, she applied for a study-abroad program and set off for India for a year.

Salzberg recalls her first experience with meditation as difficult. “I couldn’t concentrate and I had tremendously difficult emotions coming up to face. For the first time I was really looking at them directly.” At the same time, “There was something incredibly beautiful, right from the first moment. I felt deeply, there’s truth here; there’s truth here for me. And I’ve never wavered from that, I’ve never doubted that.”

In Bodh Gaya, India, in January of 1971, she attended a ten-day meditation retreat led by S.N. Goenka. “Among the other people attending the retreat were Ram Dass, Krishna Das, and Joseph Goldstein. There was this extraordinary community being born, and it was there that I met many people who have remained my closest friends to this day.”

While Goldstein and Salzberg were studying meditation in India, Jack Cornfield was living a parallel life in Thailand. The three would connect a few years later at the opening of the Naropa Institute in Boulder,Colorado. In 1974, the three cofounded the Insight Meditation Society in Barre, Massachusetts.

She describes the time leading up to the opening of the Insight Meditation Society as “haphazard.” Salzberg, Goldstein, and Cornfield were couch-surfing at friends’ houses. They were offered a house in Felton, California, near Santa Cruz, where they would house retreat visitors in one of two extra bed- rooms. One of those visitors suggested they start a “real retreat center” and connected them with a group that would become the first board of directors for the organization.

“Honestly,” recalls Salzberg, “I was 23 when we opened. I’m not totally sure I knew what a mortgage was. We were very naive, and that board really deserves all the credit to the establishment of the place.” Some of those founding members remain on the board today.

Her latest book, Real Change, aims to connect the dots between inner change and outer change, fixing our souls and

fixing the broken world around us. “As I teach around the country,” she says, “I hear rising levels of feelings of helplessness, anxiety, and people wanting to connect their inner values to some kind of action.”

Salzberg’s daily practice consists of a seated meditation practice, usually for around half an hour in the morning. She also uses any time she spends waiting as an opportunity to practice loving kind- ness, “on planes or trains, or walking down the street, I’m committed to using everyday experiences to cultivate more loving kindness and compassion, for myself and others.”

Salzberg cites Buddhist teacher Dipa Ma as one of her most influential mentors. Dipa Ma suffered so much tragedy in her life that her Burmese doctor told her she must address her mind or else die of a broken heart.

“Somehow,” shares Salzberg, “after going on a meditation retreat, her grief metabolized into this enormous compassion. She became a very profound teacher, and an amazing model for me.” 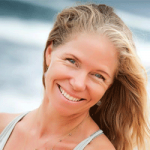 Kalia Kelmenson is the founder of Maui Mind and Body, a curator of well-being, and has worked and played in the health and wellness field for over twenty years. She works with clients...