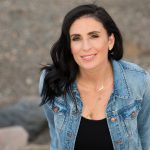 Laura McKowen is the author of We Are the Luckiest. She is a former public relations executive who has become recognized as a fresh voice in the recovery movement. Beloved for her soulful and irreverent writing, she...