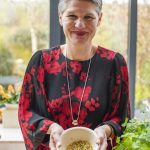 Heather Thomas founded the Mindful Kitchen in 2016, and now lives in Copenhagen, Denmark. Heather’s MBA thesis at Copenhagen Business School on the business of food waste led her to open...