From a Google search to a 10-minute walk into our future...

There’s something about your early 30s that no one ever talks about. You’re not quite the new kid on the block anymore, “young professional” is a relative term based on the average demographic of folks in your field, and yet, you could easily (God willing) have 25 to 30 good years of your career ahead of you. You may or may not already have a family to provide for, but you have an inner tenacity and you still have the capacity to give something new a try.

That’s exactly where my husband, Andrew, and I found ourselves at the beginning of 2018. We were both 32 years old, both excited about what the future held for us professionally but also ready to put some more permanent stakes in the ground. Our 20s had yielded for us an opportunity of a lifetime—to serve on the staff of a ministerial couple we admired in a church that embraced young leadership. We had a front-row seat to the ins and outs of church leadership, but, like all good things, our term there came to an end and we were at a crossroads. What would we do next?

I am more certain than ever that at some point everyone has to take a chance on their own dream.

After a ton of prayer and consideration we decided to start a new church. We both assumed the process would take months, maybe even years.

I had preached earlier that Sunday morning at a Brooklyn congregation. To my surprise, people in the receiving line kept asking where my church was, and it felt as if God was speaking through each parishioner who shook my hand. After church, I leaned over to my husband at a local restaurant and mentioned to him that I wanted us to start Google-searching for possible locations—and we stumbled across a location that was a mere 10 minutes from where we were eating. We grabbed the check and headed over there. To our surprise, the owner was present and took an impromptu meeting with us. Within 45 minutes we had our location, our date, and as a result—we had our church.

That meeting in SOHO, New York, was one of the most vulnerable meetings I’ve ever co-led. For two hours, Andrew and I laid out our vision and asked the attendees to consider whether they wanted to join the church. Meanwhile, something powerful happened: This was the day when we shared what our church was to someone other than ourselves. It was the day we became its pastors. It was the day that we committed to the reality of our vision, come what may.

Two weeks later, the responses came in from the pitch meeting attendees. Of the entire group, only 30 percent said yes. But they said yes with enthusiasm. With our new team, we were now fully able to bring the church to life. From that point until the date of our first service, we worked nonstop to bring it to life. Launch day, when it finally arrived, was better than we could have imagined.

As I write this, a mere two weeks after our first service, I am more certain than ever that at some point everyone has to take a chance on their own dream. Even if our launch day had not been successful, it was necessary for us to take that leap. At some point, one has to start. So much of the uncertainty of whether something will do well or not is quieted by the certainty of starting. The truth is, you never know how things will turn out, but when you make a decision to start, you free yourself up to see what the end will be. 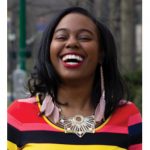 Pastor Gabby Cudjoe Wilkes is the Co-Lead, Co-Founding Pastor of The Double Love Experience, along with her husband, Pastor Andrew Wilkes. Pastor Gabby is a graduate of Yale...