In hiding what I’d lived through and thinking that it was not a big deal, I was creating a differentiation between “us” and “them” that allowed me to stay separate from the very women I was serving.

Though Poppies Grow by Michelle Kingdom

If we all speak our truth, no matter how heavy or how trivial our stories seem, then together we can light the way toward a new future and a new story, one that is no longer based on silence and shame. —ZAINAB SALBI Freedom Is an Inside Job, by Zainab Salbi.

We all have a story, no matter who we are or where we come from. The story of our lives tells of our goodness and our suffering, our privilege and our complicity, our light and our shadow, and much more. It has its own particular melody and harmony, rhythm and cadence. Most of us hide the full story of our lives and tell only the good part. I know I did.

It wasn’t until I met Nabintu, a Congolese woman in her early 50s, that I realized that I had a story to share with the wider world. I thought I was helping her after her life had been shattered in a vicious militia attack. In reality, she gave me a piece of wisdom that changed my life.

I met Nabintu in 2003 in the Democratic Republic of Congo when I was 34 years old and had been working with victims of war for more than a decade. It was during an early visit to DR Congo to see if we could expand the humanitarian work of Women for Women International, the organization I had founded in the United States in 1993. In addition to offering immediate financial aid to women survivors of war, I always made sure to listen to women’s stories. Women needed to be heard. I also wanted to be able to share these stories with those who were involved with our organization. Knowing the dire realities that women like Nabintu faced helped to raise support for women survivors of wars everywhere. Over time, we would also try to offer these women education and vocational training.

Like many well-intentioned humanitarians, I was unconsciously acting as the savior.

Nabintu’s story was horrifying but not unique to the traumas that women suffer in war. It started when a faction of violent rebels descended on her village. When she saw them coming, she hid under her bed, but the rebels found her anyway, as well as her three daughters, aged 9, 21, and 22. The men forced them to the ground, spreading open their arms and legs, circling in a wild urge to take their turn. They raped them all. There were so many men around her daughters that Nabintu lost count. They ordered Nabintu’s son to spread his mother’s legs as they raped her. Then, they commanded him to rape his own mother. When he refused, they shot him in the foot.

The rebels’ violence did not stop there. They ransacked Nabintu’s home, pillaging what they wanted and burning everything else—the house, the clothes, every dish and stick of furniture. Nabintu and her daughters were left naked. Neighbors who had survived the rebel attacks came quickly and lent them each a piece of cloth to use as a dress. When I met Nabintu shortly afterward, she had moved from her village, fearing another attack. She was wearing that same dress that her neighbors had given her on that terrible day. It was the only one she owned. She’d made shoes from material she plucked from piles of garbage in her new neighborhood.

As she finished telling her story, Nabintu looked me in the eyes. “I have never told this story to anybody else but you.”

I took a deep breath. “Nabintu,” I said, “I am a storyteller. I share stories like yours throughout the world to raise support and attention to what is happening to women in war-torn places like DR Congo. Should I keep your story a secret?” I needed to be honest with her. The support I would raise in using her story would not all go to her. Some of it would, and the rest would help many other women like her.

She smiled. “If I could tell the whole world about my story, I would, so that other women would not have to go through what I have gone through. But I can’t—you can. You go ahead and tell the world, just not to my new neighbors.”

Nabintu had the courage I did not have. She had lost everything, but she still had her voice, and she wanted to use it. Not me. I hid my own story and pretended not to have one. My job was to get other women to break their silence and to share their stories. I never wanted to risk sharing my own. For the longest time I told myself, I have no story to tell.

Like many educated, liberal, activist women, I was passionate about the plight of other women whom I considered more disadvantaged than myself. I had grown up in an upper-middle-class family, had traveled around the world, gone to school and university, enjoyed relative safety and security. In my mind, whatever I or my family had gone through in Iraq, even as Saddam Hussein rose to power, was not as severe or extreme as what these women had gone through—these women who not only were poor but had survived unthinkable violence. My material privilege provided an easy cover: Someone like me did not have a story. But underneath that cover, I was embarrassed to share the fullness of my experience. How could I be a strong women’s rights activist when I had been in an arranged marriage, had been raped, and had suffered from all the fears and uncertainties of growing up in a dictatorship?

The truth is, in hiding what I’d lived through and thinking that it was not a big deal, I was creating a differentiation of “us” and “them” that allowed me to stay separate from the very women I was serving. Like many well-intentioned humanitarians, I was unconsciously acting as the savior. By default, this made the women I was working with into helpless victims who needed saving. This position gave me no claim to suffering, while allowing these women no claim to wisdom. I was seeing the world through two separate paradigms that would never require me to stand in my truth.

No secrets, no hiding, no shame. When I took control of my story and willingly shared it with all, I felt that no one could hurt me anymore.

The Descent of Beauty by Michelle Kingdom

I couldn’t continue to do my work with women authentically if I stayed silent. I decided to write a memoir to tell the whole world my story. I did not want to hide anymore. It was not easy. In fact, it was a journey of fear and a walk of humility. I held on to the wisdom shared by Nabintu that if I spoke my truth, other women might feel less alone, and that they, too, would find their own paths to freedom no matter what they had suffered. I did not know how hard it would be to break my silence. But I also didn’t know how very worthwhile it would be, either.

It is not easy to tell our stories. They carry our secrets, and I had buried mine deep in my consciousness. It was hard enough to admit that I’d been in an arranged marriage, and it was even harder to say that my first husband had raped me. But I had no idea that the hardest thing of all would be to expose the story I’d been trained never to tell, that of my family in Iraq.

Some stories may indeed be more extreme than others. That doesn’t mean that other women should not break their own silence and share their own stories. Just because you work in London or Silicon Valley does not mean that you should play down the abuses you endure. Some people may have been molested by a relative, and some have been verbally abused by a boss or a romantic partner. Some silence themselves to please those in power, even a relative or a colleague. Some allow themselves to be treated as sexual objects, thinking it will bring them a sense of acceptance, worth, and safety. The extremity of the stories might be more intense for a woman in Afghanistan than for a woman in Mississippi, but the essence—the abuse of power, the manipulation by fear, the stripping away of human dignity—is the same in both places. It is just cloaked by a different robe, dressed up in a different cut of cloth.

When we hide our stories, we isolate ourselves from the collective story. If we label the stories of “these poor people over there” as the only ones worth hearing, then we are assuming that we are totally free, without a shadow of our own, with nothing to expose or reconcile. We assign ourselves as the “saviors” and them as the “victims.”

If we all speak our truth, no matter how heavy or how trivial our stories seem, then together we can light the way toward a new future and a new story, one that is no longer based on silence and shame. I had locked my past into my heart for so many years that it had turned into a black stone, weighing heavily in the center of my chest. It suffocated me and sapped me of energy. But when I unlocked my secrets, that dark stone turned into a crystal: clear, transparent, and beautiful. In my utter vulnerability lay my protection and my power. No secrets, no hiding, no shame. When I took control of my story and willingly shared it with all, I felt that no one could hurt me anymore.

Now, whenever I hear a person speak their truth, even if it sheds light on the worst aspects of who they are, it always resonates with me and brings tears to my eyes. When told simply and honestly, the most terrible story carries courage, grace, and love.

Whenever we tell our truth and break our silence, we become like candles that light the way for others out of their darkness until they find the courage to speak up themselves. 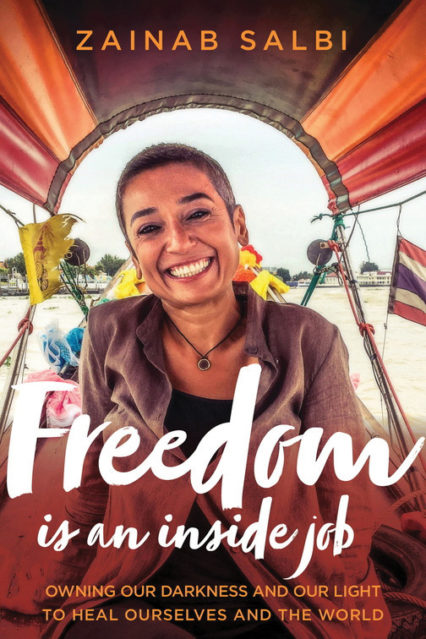